In 1844 the area once known as Bloomingdale on Manhattan’s west side was still a neighborhood of dirt roads and modest frame houses. Father Zachary Kunz, a Hungarian Franciscan priest, was faced with a dilemma. As pastor of St. John the Baptist Church on West 30th Street, he found himself standing outside an empty church – closed by the bishop of New York over a dispute with the parish’s lay trustees.

Not wanting to leave his faithful parishioners without a place of worship, Father Zachary petitioned the bishop to open a new church. Within a short time he managed to purchase a piece of property only a short distance away from St. John’s. The cornerstone of the new church on West 31st Street was laid by Bishop John McCloskey on May 9, 1844. Father Zachary decided to dedicate the new edifice to St. Francis of Assisi, the patron saint of peacemakers. 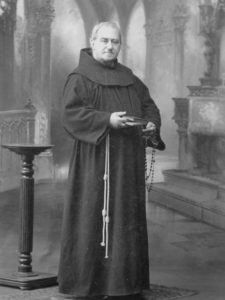 Within a few months the new church was completed and services began. During the next forty years the parish grew and prospered. By 1890 the need for a new and larger church became apparent to its pastor, Father Ludger Beck. Father Ludger presented his plans to his parishioners and received their full support. He next petitioned Archbishop Michael Corrigan for a loan of $15,000 against an estimated $60,000 construction cost. The sum was readily granted, and with the advent of the summer of 1892, the new church was completed.

The grand dedication ceremonies too place on Sunday, July 17, 1892. Archbishop Corrigan blessed the church and consecrated the three altars. Archbishop Winand M. Wigger of Newark, who had grown up across the street from the original church, delivered the sermon. He was also the donor of a large stained glass window dedicated to St. Francis of Assisi.

The city’s extraordinary growth at the turn of the century stimulated great social and economic change. It quickened the pace of urban development and altered the face of many neighborhoods. Nowhere was this impact felt more keenly than on West 31st Street. Many families moved away when their stable, working class community was transformed – almost overnight – into the heart of New York City’s notorious “Tenderloin District.”

To keep up with the changes around them, the Franciscan Friars, long used to coping with the challenges of bringing God to the people in diverse ways, inaugurated what was to become a way of life for “parish without parishioners.” Thus was born the concept of an urban “service church” suited to the needs of a transient population of commuters, shoppers, tourists, laborers and business persons.

The first of these innovations was the introduction of a Mass known as the Nightworker’s Mass, which was celebrated for employees working on the night shift as well as actors, newspapermen and travelers out of Penn Station who had either arrived in the city late at night, or had a long wait between connecting trains.

Soon afterwards, St. Francis Church responded to the spiritual needs of daytime employees and became the first church in America to receive permission to celebrate a daily Mass as late as 12:15 in the afternoon. Father Anselm Kennedy, the pastor who introduced the Noonday Mass, also began the practice of hearing confessions daily throughout the entire day. In response to the disaster of the Great Depression, the daily Breadline started in 1929 and has continued to serve the hungry of our city every day since.

Father Samuel Grega became pastor in 1931; he is largely responsible for making St. Francis Church the center of so many popular devotions. His successor, Father Capistran Petrie, served as pastor during the late 1930s and the early years of World War II. He reached out to the many servicemen in the city during those years. He obtained permission to have Mass every Sunday at 3 PM for members of the armed forces only. The story is told that Father Capistran received a phone call one Sunday evening from Francis Cardinal Spellman who said, “I understand you refused admission to the Mayor of Boston at the three o’clock Mass today.”

“But Your Eminence, how did you find out?” Father Capistran asked.

The Cardinal replied, “His Honor came up here and complained to me. I told him that he will have to join the Army if he wants to get in.”

As the war years passed, St. Francis Church continued to grow in popularity. More Masses were added to the daily schedule. In the late 1950s plans were made for the renovation of the upper church. The dedication of three new marble altars in May of 1961 marked the end of five years of major construction. New entrances both on 31st and 32nd Streets, new outdoor shrines and the air-conditioning of the upper church were accomplished during that time.

During the ’60s and ’70s St. Francis Church kept apace with the changes brought about by the Second Vatican Council as well as in society in general. Programs for youth and senior citizens kept the church humming with activity. The “Good Word” telephone outreach provided a daily message of inspiration for homebound New Yorkers. Meeting space was provided for 12-Step Fellowships. Adult education classes provided valuable ongoing formation in the Christian faith.

Over the past twenty years numbers programs and ministries have sprouted in response to the needs of an ever-changing church and society: the St. Francis Residences for the chronic mentally ill homeless; the Come Home program for alienated Catholics; a support group for separated, divorced and remarried persons; an expanded Adult Education program; a professionally-staffed counseling center; a referral center for newly-arrived immigrants. The list goes on and on.

Throughout this time, St. Francis Church has found itself in the forefront of ministry to an increasingly diverse ethnic population. The faces that make up our daily worshipping communities reflect the growing immigrant populations. St. Francis is home to vibrant Spanish-speaking, Filipino and Korean communities. The statue of Mary Mother of the Church, installed during the 1992 Centennial Restoration of the upper church, is dedicated to those people who have found a new home in America and a spiritual haven at St. Francis Church.

For 175 years, the Church of Saint Francis of Assisi has been more than just a house of worship in midtown Manhattan. It has served as the focal point for untold numbers of people seeking a place of compassion, inspiration, comfort, nourishment and education. Guided by the spirit of Il Poverello, the little poor man of Assisi, we are confident that St. Francis Church will continue to stand well into the 21st century and beyond as a beacon of faith, hope and love. 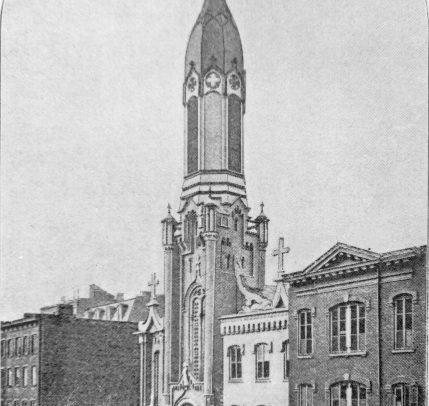 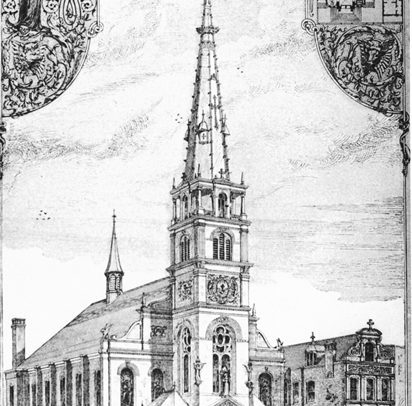 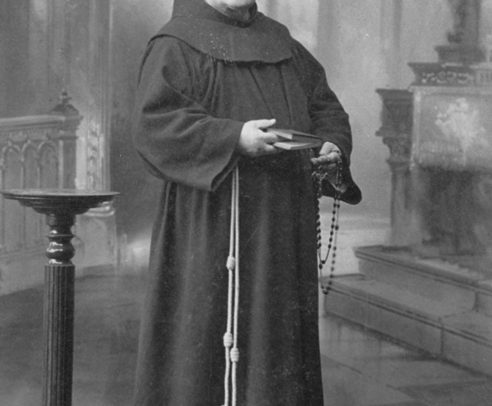 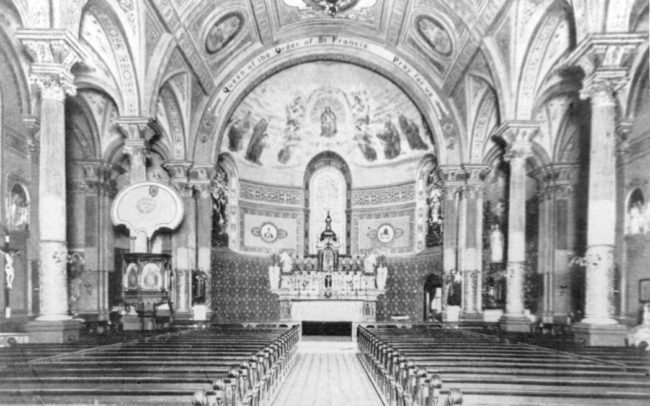 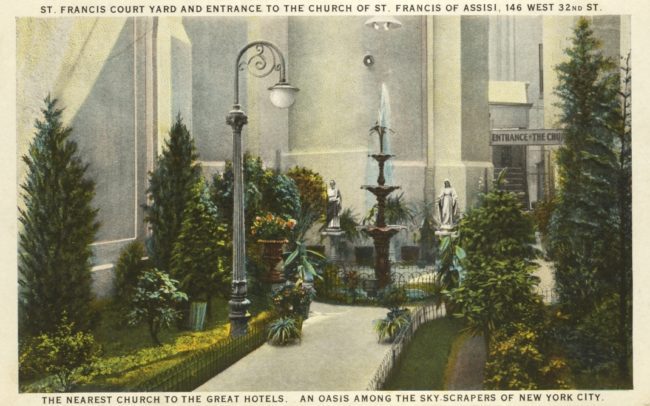 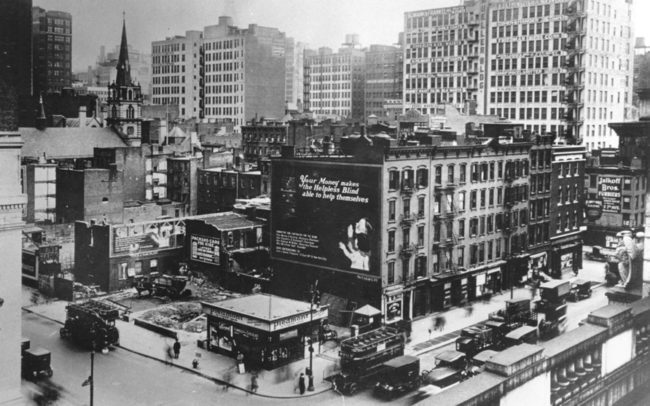 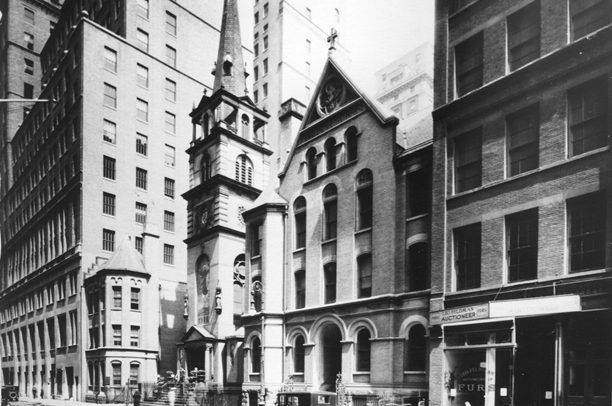 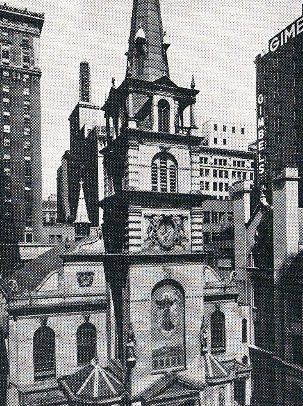 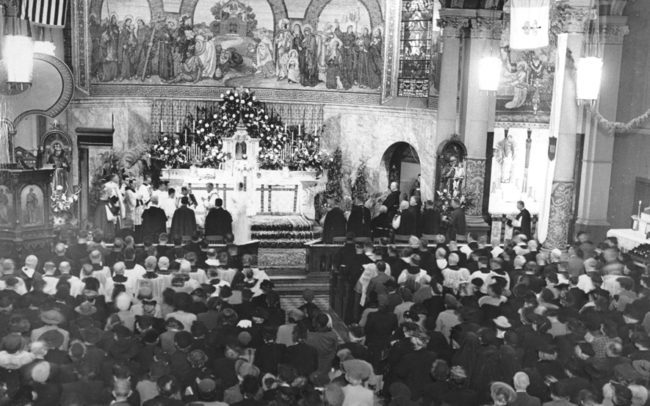 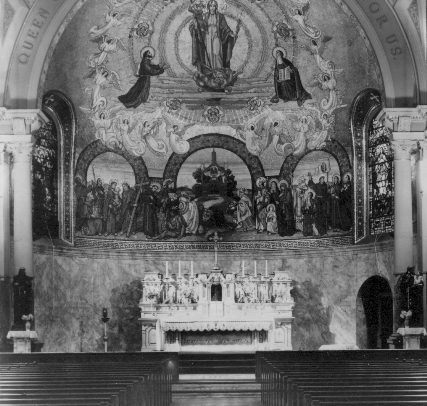 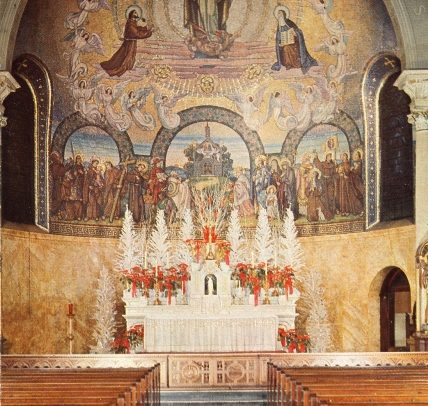 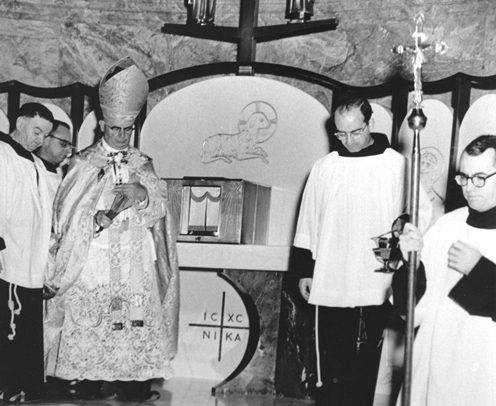 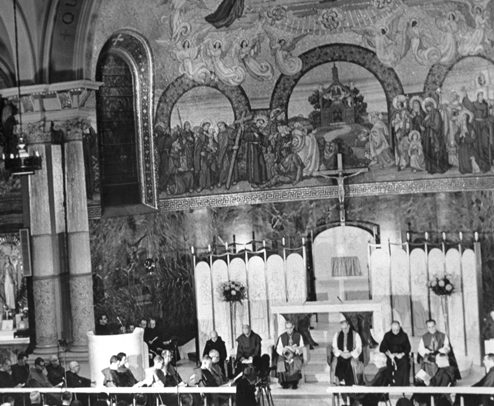 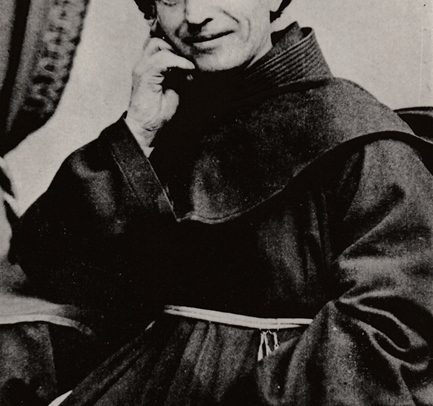 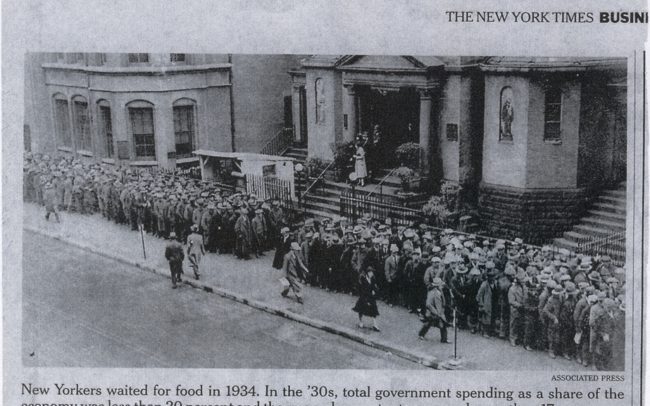 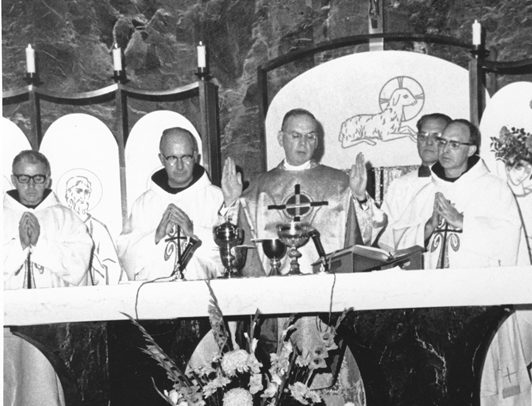 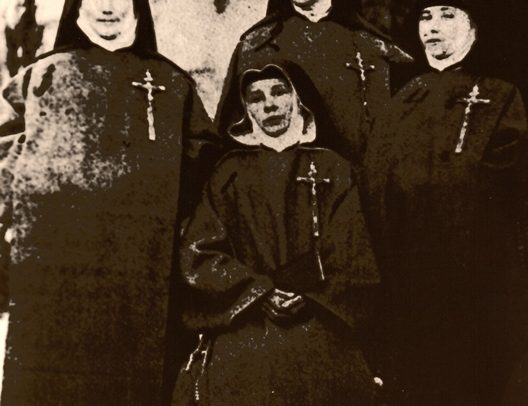 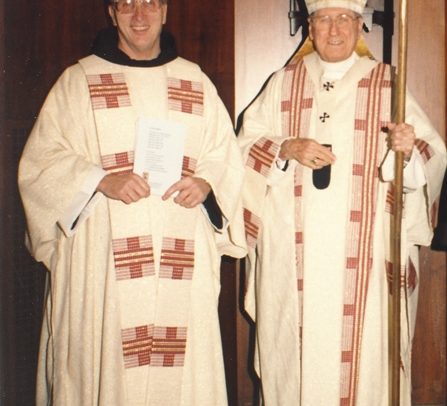 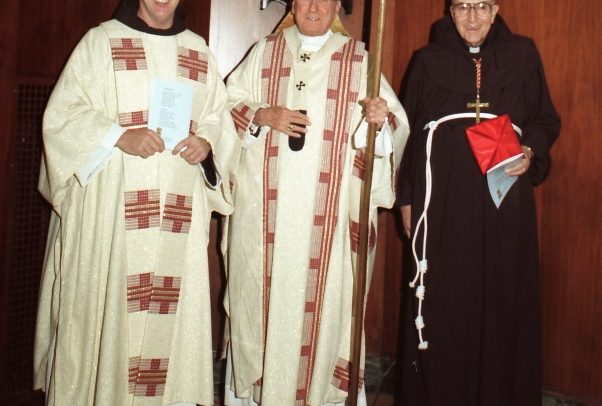 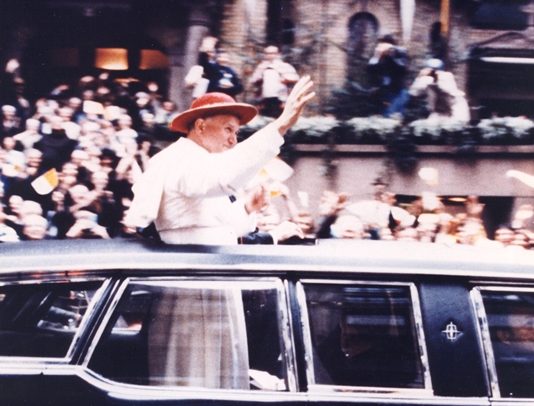 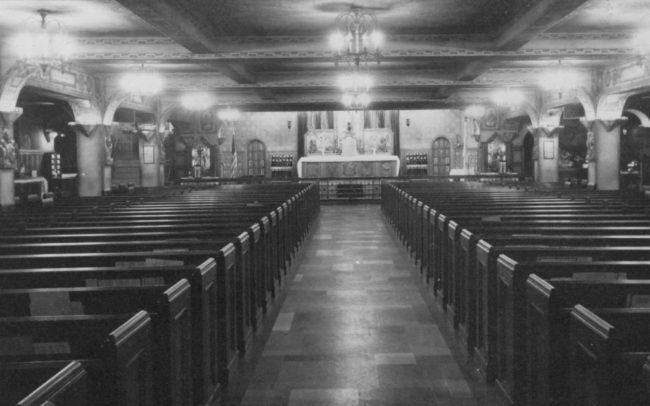