The Friars of Thirty-First Street, Part 12 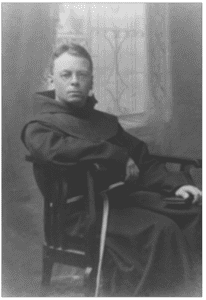 Fr. Damian Kehr, O.F.M was appointed pastor of St. Francis in 1914. He had been guardian of the friary for a year when he succeeded Fr. Eusebius Schlingmann, O.F.M. as pastor. Many alterations had to be made on the church property. The sidewalks had to be widened and the iron fences moved back. Water from an underground brook suddenly appeared in the cellar and pumps had to be installed to carry the water into the sewers.

Fr. Damian installed one of the largest and finest organs in the country for St. Francis Church. The contract for the new organ was signed with Reuben Midmer & Son of Merrick, NY in September of 1915. The installation alone required six weeks, as the organ occupied most of the choir loft and a large part in the tower space. At the time of the installation it is recorded: “This organ is a first class instrument and the sixty-four gilded and exquisitely decorated front pipes give it a fine appearance. For power, sweetness and variety of tone, this organ can hardly be surpassed by any other.” The magnificent instrument with over 3,000 metal and wooden pipes was first played at Mass on Easter Sunday, 1916. For over seventy years, Fr. Damian’s courageous acquisition provided joy and beauty for the daily liturgies and devotions at St. Francis.

During Fr. Damian’s pastorate, each year the number of younger families decreased as the businesses continued to expand in the neighborhood. Sunday after Sunday, the pastor witnessed more and more vacant family pews as family after family moved elsewhere. At the same time, the number of transient devotees continued to grow, and the friars began to experience new and vibrant forms of ministry on West 31st Street. In the spring of 1919, Fr. Damian began formulating plans for the celebration of the parish’s 75th Diamond Jubilee. The celebration was organized for October 1919, but was postponed until the following year. Meanwhile, the Provincial Chapter of 1919 transferred Fr. Damian to St. Anthony Friary in Butler, NJ. A former Minister Provincial, Fr. Anselm Kennedy, O.F.M., the first American-born friar, was appointed Pastor of St. Francis Church.