The Friars of Thirty-First Street, Part 13 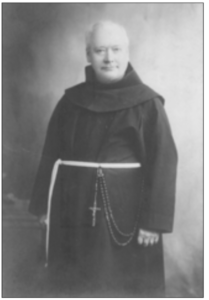 Fr. Anselm Kennedy, O.F.M. was a farm boy from Maple Ridge in upstate New York. He was ordained on May 26, 1888 by Bishop Wigger of Newark, and spent his early years as a priest in Paterson, NJ and Croghan, NY. In 1896 he was transferred to Denver, CO, and then served in Butler, NJ as pastor. Among the people, Fr. Anslem was known as an unassuming and gentle friar whose cheerfulness was contagious. After eight years as pastor in Buffalo, Fr. Anselm was chosen by the friars to serve as Provincial Minister of Holy Name Province from 1910 to 1916. His appointment to St. Francis of Assisi as pastor in 1919 was certainly a pastoral blessing for the parish.

He brought to the ministry an extensive pastoral experience, a simple but practical wisdom, and a genuine love for people. His first task was to carry out the celebration of the Diamond Jubilee of the parish, planned by his predecessor, Fr. Damian, Kehr, O.F.M. The observance of the jubilee began on Sunday, October 10,
1920, at the “Nightworkers’ Mass.”

The Very Rev. Monsignor Luke Evers, pastor of St. Andrew’s Church near City Hall, celebrated the Mass since he had been the first priest in New York to inaugurate an early Mass for nightworkers in 1901. It was fitting, therefore, that he be invited to offer the “Nightworkers’ Mass” on the occasion of the 75th anniversary of the parish. Fr. Eusebius Schlingmann, former pastor, and Fr. Philip Waldmann, a native of New York City, assisted as deacon and subdeacon of the Mass.

On the same day, at 11:00 AM, a Solemn Mass of thanksgiving was offered. This was preceded by a procession of the school children, altar boys, Knights of Columbus, and clergy. Archbishop Patrick Hayes presided at the Mass. At the close of the Mass, Archbishop Hayes congratulated the Franciscans on their successful ministry in the New York Archdiocese.

Fr. Anselm guided the Church of St. Francis of Assisi as its pastor for ten years. During that decade he saw the little edifice on 31st Street develop into one of the busiest and most popular churches in New York City. The remarkable progress was largely due to the single-handed efforts of this short, white-haired friar. In those days the church personnel comprised at most eight priests. All worked feverishly, but Fr. Anselm did a lion’s share of the work. He was constantly ministering. He celebrated the famous Nightworkers’ Mass every Sunday and holyday. He heard confessions for hours, conducted devotions, directed the work of ushers, sexton and janitor, and busied himself in countless ways in providing comfort to those who came to the church. “Some days I am in the confessional for 11 hours, other priests hearing too,” a New York daily newspaper quoted him. It was mainly through the medium of daily confessions that “the little church among the skyscrapers” came to be known and loved by the Catholics of Greater New York.

One of the improvements that endeared churchgoers to Fr. Anselm was the little garden on the 32nd Street side of the church. When the new parochial school was built, Fr. Anselm had the old structure razed, and the entire site was transformed into an attractive garden. A fountain with a goldfish pond was placed in the center, and in a secluded corner, a statue of St. Francis, surrounded by birds and animals, was erected. A colorful column in the New York World recalls the garden and preserves the memory of what preceded the present courtyard of St. Francis on West 32nd Street:

“A little patch of green grass, geraniums, daisies and evergreens fronts on 32nd Street, hemmed in by whitish walls, and bending over the flowers is a barefooted friar in a brown cassock. On the sidewalk nearly every passerby is halted by the scene, common enough among the missions of California, that is bizarre in the heart of Manhattan. A sign on an iron fence informs that this is the entrance to the Church of St. Francis of Assisi.

‘My new St. Francis Garden!’ beams Fr. Anselm Kennedy. ‘The roses are on their way here from Assisi. For years it has been my dream to have this garden, both as a tiny beauty spot in the heart of the city, where there is so little natural beauty, and as an inviting side entrance to the church.

‘Last Sunday was the first on which we could test our garden as a means of attracting guests from the big hotels to our Masses. How they came! We had the biggest attendance in years. Our little St. Francis Rose Garden brought them.’” 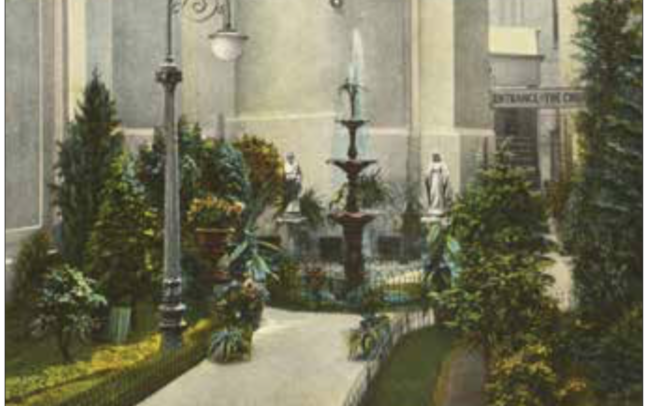