The Friars of Thirty-First Street, Part 19

On the eve of the feast of St. Francis, October 3, 1944, the Very Rev. Delegate General of the Friars Minor in this hemisphere, Fr. Mathias Faust, was celebrant of the Transitus ceremony, commemorating the death of the founder of the Franciscan Family. Following the traditional spirit of fraternity between the Franciscans and Dominicans, the Ver Rev. John B. Reese, O.P., Prior of St. Vincent Ferrer Priory on the upper Eastside, was the celebrant for the centenary Mass. The Most Rev. Bernard T. Espelage, O.F.M., Bishop of Gallup, New Mexico, presided. An eloquent sermon on Saint Francis and Saint Dominic was preached by the Rev. Robert J. Slavin, O.P. of the faculty of the Catholic University of America. The music was provided by the Men’s Choir assisted by 40 boy choristers of the Church of St. Vincent Ferrer, with S. Constantine Yon as organist and choirmaster. 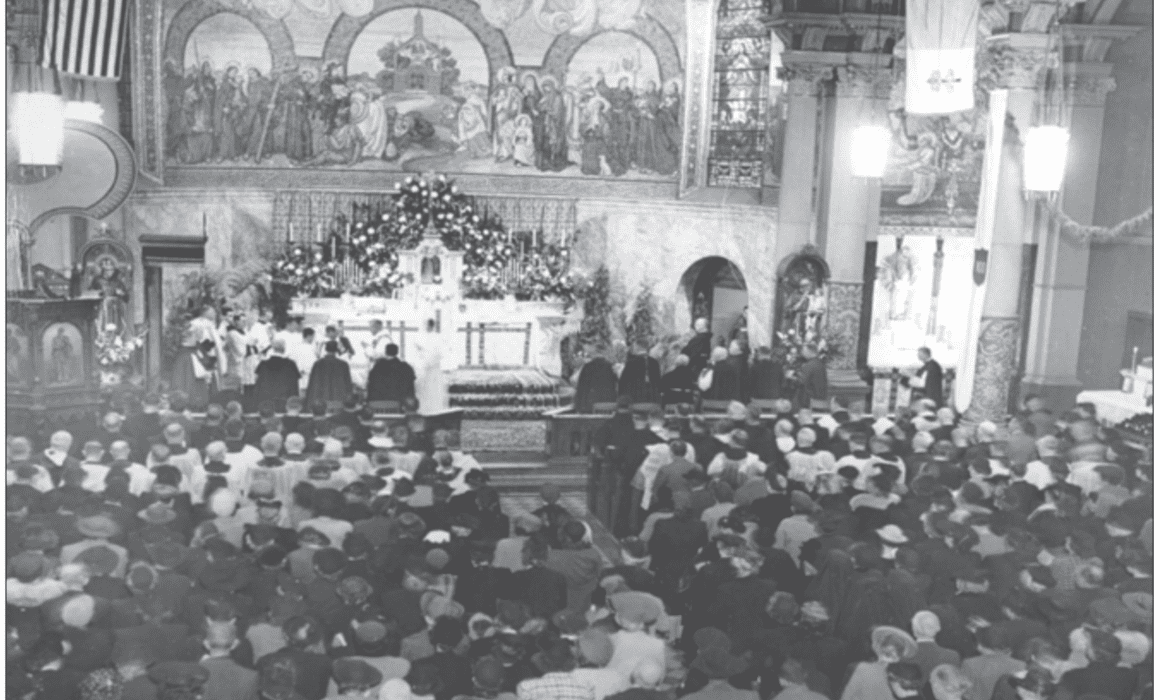 The Solemn High Mass celebrated by the Dominican Friars on Wednesday, October 4, 1944 for the 100th Anniversary of the founding of St. Francis Church.

Centenary ceremonies continued throughout the following week. A Solemn Pontifical Mass was offered for the deceased friars, parishioners, benefactors and friends of St. Francis Church. The next day a solemn Mass was offered for the living and deceased members of the Secular Franciscan Order of the church. On
October 7, a Solemn Mass for the members of the Armed Forces of our country was offered. A Solemn
Pontifical Mass was offered on Sunday, October 8, for the intentions of all friends and benefactors of
the friars. The Nightworkers’ Mass at 2:30 AM was offered by Monsignor WIlliam E. Cashin, pastor of St.
Andrew’s Church, New York. Solemn Vespers at 5:30 PM was celebrated by Bishop Bernard T. Espelage.
A supper for the laity and friars was held, and the cententary observance brought to a festive close. The tiny acorn planted in 1844 by Fr. Zachary Kunz had grown into a sturdy oak with its roots deeply embedded in the fertile soil of West 31st Street of New York City.

Fr. Mathias Faust, Delegate General of the friars in 1944, and former pastor of St. Francis Church, reflected on the one-hundred-year history of the Franciscan church in midtown Manhattan. His words reflect the spirit and joy of St. Francis Church on the eve of its 100th birthday:

“It is recorded that when, a hundred years ago, the bells of the Church of St. Francis of Assisi, on Thirty-first Street, called for the first time the faithful this neighborhood to divine worship, our little belfry fairly dominated this whole area. That is no longer so. We have been caught in the rapid and mighty maelstrom of a large city’s, nay, of a nation’s enterprise. As a result, the noise of confused voices and hurried steps of a restlessly surging humanity, and of the unceasing clatter and din of their manifold tools on all sides as well as from the air above and ground below, mingles almost rhythmically with our daily monastic exercises, while all around us massive structures of steel and stone raise their gigantic heads to alpine heights, burying our little house with their might and magnitude. Meanwhile, those same bells continue fearlessly and fervently to sound their age-old refrain, ‘venite, adoremus,’ and the tiny steeple still points upwards, unbent, unswayed, and undisturbed, to the ancient dome above.

Yes, there is no other meaning to this happy Hundredth Anniversary of St. Francis Church. Let us raise our hearts to God and  give thanks to His Holy Name. God does great things in simple fashion, and the very simplicity of His ways is the certain proof of His enduring Providence. ‘Some trust in chariots, and 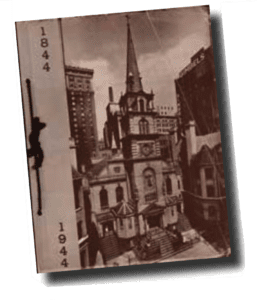 The commemorative anniversary journal for 1944.

some in horses; but we will call upon the name of the Lord our God’ (Psalm 20:7). This is God’s work, and God’s work it shall remain. Such shall be the grateful pledge of the sons of St. Francis of Assisi on this Jubilee Day.”

One year later, a photo and an article about St. Francis Church appeared in Time magazine. The opening line of the article referred to St. Francis Church on West 31st Street as “the most cosmopolitan and busiest Roman Catholic Church in the U.S.,” and depicted the edifice as “small and sandwiched off among office buildings in a crowded section near Pennsylvania Station.”