The Friars of Thirty-First Street, Part 20

The pastors who followed Fr. Lucian Gallagher continued his efforts to respond to the needs of the people in the post- World War II era. Fathers Terence McNally, Emmanuel Duffy and Bernard Tobin were extremely conscious of the changing times in New York City.

The Provincial Chapter of 1949 appointed an equally eloquent preacher to succeed Fr. Lucian in the person of Fr. Terence McNally. He had served as pastor of St. Stephen of Hungary parish in the Yorkville section of New York for 15 years, then moved to midtown Manhattan to be the guardian and pastor of St. Francis on 31st Street. He inspired something approaching awe in the young friars during his six years at St. Francis Church, and proved to be the capable administrator such a multifaceted ministry required.

In June 1955 Fr. Emmanuel Duffy was appointed pastor of St. Francis for a brief three-year term. He began immediately to concentrate on the physical needs of the church and friary. For many decades, hundreds of friars had mounted the pulpit in the nave of St. Francis Church to preach the Word of God. Fr. Emmanuel replaced the familiar pulpit in 1956, and then removed the side- aisle benches. The space gained by both removals made the church appear much larger. At the same time, he installed marble around the bases of the pillars and along the side walls. The following year, because of the constant use of the parlors for counseling, he renovated them and added air conditioning. 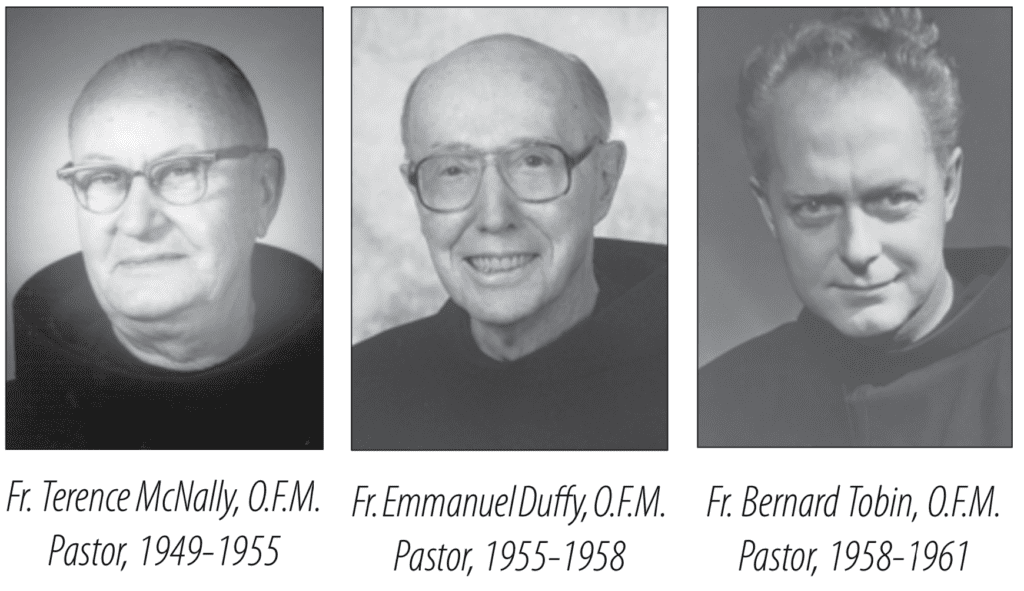 Early in June 1957 the construction of a new entrance on 32nd Street was undertaken by Fr. Emmanuel. Many people were unaware of the lower church, while others did not know of the existence of the upper church! They were accustomed to one or the other. When the 32nd Street entrance was closed, it took some of the regular worshipers a while to adjust themselves to the walk around the block. The new entrance opened in June 1959. People could now walk in from 32nd Street or 31st Street to the covered vestibule which leads to both the lower and the upper churches. 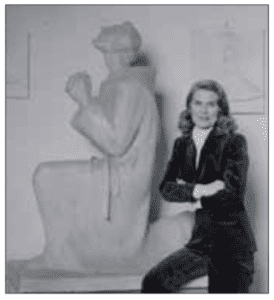 A large stone crucifix over the doors marks the entrance to the church on 32nd Street, and a bronze statue of St. Francis, kneeling with his eyes cast upward to the crucifix, was designed for the newly-created courtyard by Betti Richard of Vienna, Austria. Ms. Richard’s husband was the ambassador to the United Nations from Austria, and they were living in New York City. Brother Cajetan Baumann, O.F.M, the friar architect responsible for enlarging and beautifying the 32nd Street entrance, desired to have a statue of St. Francis of Assisi for the courtyard. Ms. Richard responded to the challenge in 1957 and created one of the most popular images of St. Francis in the world, lovingly caressed by hundreds of people as they pass day after day. When she was affiliated to Holy Name Province in 1986, Ms. Richard told the friars that the St. Francis statue on 32nd Street “came from within her own heart much as a child comes forth from the womb of a mother.”

On May 9, 1961, Bishop John Maguire, Vicar General of the Archdiocese of New York, consecrated three new altars in the church: the main altar and two side altars dedicated to St. Francis of Assisi and St. Anthony of Padua. The latter two featured white marble statues which were also created by Betti Richard. The dedication marked the end of five years of construction and renovations at St. Francis Church. New entrances on both 31st and 32nd Streets, three new outdoor shrines, new floors, pews and pulpit, newly designed confessionals, and the air-conditioning of the upper and and lower churches were finally accomplished.